Heading to the Junk yard in Indianapolis

Posted by Indianapolis Junk Cars at 4:39 PM No comments:

Cash for your junk cars

Get rid of that old car sitting in the driveway, in your backyard, taking up space in your garage or parked over at your friends house, plus put a little money in your pocket.  Sell us that salvaged car.  Think how much better your yard will look without that old car sitting there on flat tires.  If you live in an apartment, they will tow your old salvage car away without your knowledge and it will costs you dearly.  If your car is sitting on a flat, hasn't been moved in a few days, the license plate is expired or if you don't have the proper parking tag.  Call us before this happens and put some money in your pocket for your junk car.

We buy your salvage cars no matter what kind of shape they are in.  Do you have a junker sitting in your driveway?  We will buy that junk car.  Does your car need repairs that you can't or don't want to pay for?  We'll give you cash for your junk car.  Do you have a need for fast cash for a family emergency?  Let us pay you cash.  We will tow it away free, usually within 24 hours.  Call Salvage Cars Indianapolis.

We buy most of our junk cars in the Indianapolis Metro area, but are willing to drive for some of them, so give us a call.  We are willing to work with you.

We buy hundreds of salvage cars every month, and our success is reliant on three things. First and foremost, we pay the most cash possible for the cars we buy. We can pay the most cash because we don't just buy cars for scrap but when possible, we try to re-sell the cars. We work with used parts suppliers, used car dealers, mechanics, and scrap metal and salvage yards all over the country.

Second, we always tow away your junk car for free, and can usually pay for and pick up a car within 24 hours. There are no hidden fees, no strings attached. We show up with the cash we promised, you sign over the title, and we tow it away at absolutely no cost.

Third, we have relationships for over 25 years with buyers in your market and know that you have to be good for your word to succeed in the long run. We've been buying cars for 25 years and are a family owned and run business. If you accept our cash offer for your used car, wrecked car or junk
car, that cash will be in your hand and your old car will be towed away for free in the time frame we promised.

Our experience has taught us that the competition is tough. So, please give us a chance to buy your car, you'll see that we're a cut above the rest.  We will pick up your salvage car in Indianapolis and all surrounding areas including Carmel, Brownsburg, Avon, Plainfield, Fishers, Noblesville, Lebanon, Fortville, Pendleton, Greenfield, Greenwood, Whiteland, Franklin and all Indianapolis Metro areas.

We are here to tow away abandoned vehicles, tow away your junk cars, convert cars to cash, or be your junk car buyer in the Indianapolis area.  Just give us a call.

Sell us your junk cars in Indianapolis

This is where you get paid cash for your junk cars!

for a free over the phone quote on what we can pay you for your junk cars or truck.

Or fill out the form below for your FREE price quote.


Give us a call.  We are locally owned and family operated.  You will like the personal service that you get from us.

"I had wrecked my car.  It was a 1998 Chevy Malibu.  I knew this car didn't weigh too much and now it was total junk.  I call Sell Junk Cars Indianapolis .com and they took care of me.  Not only did they pay me almost twice the amount that I thought I was going to get, but they came out, paid me cash and towed my junk car away for free also.  They did all of this within an hour too.  I hope I never have to use them again, but if I am in that situation, I sure will.  As a matter of fact, I had 2 friends that needed to junk their cars and I referred them to them too."-C. Clark-Indianapolis

"I check three different "cash for cars" companies in the Indianapolis area.  Junk Cars Indianapolis.com offered me the most money and free towing.  When I started to ask questions, most of those other companies that offered us cash for our car were going to charge us for the towing.  They were also really nice too."-Debbie-Greenwood

"When it comes to junking cars, I give these guys 2 thumbs up."-Sue-Brownsburg

"My home owners association was after me to get my car moved since it had a flat tire and the plates were expired.  These guys game up, paid me cash and towed away my car in less than an hour."-Glenn-Carmel

"My teenage son wrecked his 1996 Chevy Cavalier.  The insurance company totaled it out.  Junk Cars Indianapolis came out and paid us cash for it.  I didn't think that old little car was worth anything.  Man, was I surprised.  Then they towed it away for FREE.  What really impressed me though was the professionalism of the staff.  They were very easy to deal with and very informative.  If I ever have to scrap a car again, I am calling them first."-Pete-Indianapolis

"I was so glad that I found Indianapolis Junk Cars.  They gave me over $100 more than my next best quote on my wrecked truck"-Dave, Indianapolis

"When I made my decision to finally scrap my old car, my work had just begun.  I called every junk yards, scrap yard, salvage yard, cash for cars buyer and anyone else in the Indianapolis area.  After making several phone calls and waiting for two days for different tow truck to show up, I finally had one company that offered me the most money for my junk car show up.  Then they offered to pay me $75 less than they promised on the phone.  I called Junk Cars Indianapolis then and they came right out, paid me with cash and didn't argue one bit about what they would pay for the car.  I should of called them first."-Kevin, Indianapolis

"Junk Cars Indianapolis was a lifesaver for me.  I need my old car moved and moved quick.  I was moving and hadn't even thought that old car in my back yard.  Not only did they come dig that old junk car out, but they paid me cash and had it out in less than 2 hours after I called them."-Nancy, Whiteland

"Thank you for pick up my junk car and getting it out of my front yard fast.  Your tow truck driver was here in less than 35 minutes and I live on the other side of Indianapolis." -Bob, Indianapolis

Many people think that a junk car is a car that has been wrecked, crashed, has a bad motor or tranny or has just gotten old sitting in the garage or under that tree in the backyard for several years.  This is not necessarily the case.  A car becomes a junk car when it costs more to keep it running or to get it running than the car is worth.  We actually buy many running and driving cars.  Why is this, you ask?  Many cars just costs so much money to keep them running.  They may have an oil leak, or a power steering leak, or something that makes you continually add fluids, or other minor repairs.  When it is all said and done though, it can costs you more money to keep a car or truck like this running than buying a newer car or at least one in better shape.  We always pay cash for junk cars.

We always pay CASH for your CAR!
Cash for Cars Indianapolis
Posted by Indianapolis Junk Cars at 9:30 AM 1 comment: 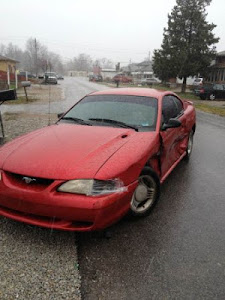